There is one thing in Hong Kong that has completely divided the group – the Durian. Some of us (the ones that have a sense of smell) think it is a foul smelling horrible fruit that should not be consumed by humans or in the vicinity of humans. Others think it is a bite of the tropics and goes very nicely wrapped up in a thin pancake together with some custard, thank you very much.  To keep on the safe side I will only share some of the other fruits we sampled in HK:

Of course, there is the ever popular sign spotting. What hilarious or beautiful public announcements are spread for our enjoyment and can we spread them any further? To start with: 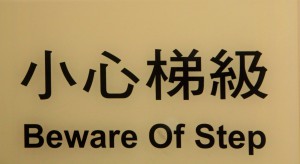 Today we crossed the great divide between HK and maninland China. A true crossing: there was some concrete, a river, a bridge and a sign stating that U-turns were not allowed. We were enthusiastically received by our host here, we have had amazing Chinese noodles for lunch and felt out kitsched by the Window of the World – which outdoes the Vegas Strip LED for LED.

We were disappointed in our ability to hook up a VPN, still trying but for now our internet is slow and limited…