We were already spotted on the platform of the metrostation “Are you coming for Maker Faire?” – “yes” – “Follow me, I show you”. It must be our geek-sjiek attitude..

Just out of the station there were many of the Maker-red-robots, drones in the air and a rather large Bumblebee (Transformers – yellow one). People were waiting for us with maps and kindness – everything has been really well marked and easy to find. 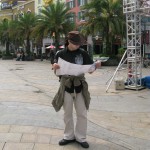 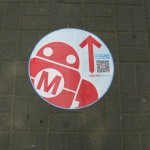 The Faire itself is bigger than we expected and outside (huh?). We were impressed by the guys from 3rd Ear, a threedimensional music experience. Also, a guy from Music Thing Modular – who builds modular synthesizer eurorack modules- gave us the PCBs for two of their modules: a spring reverb and a random sequencer. With a bit of luck we can find all the components we need for these on the markets later this week.